Free shipping on orders over $50

Free Local Delivery on orders over $50

Posted on September 01, 2017 by web@shopmollygreen.com 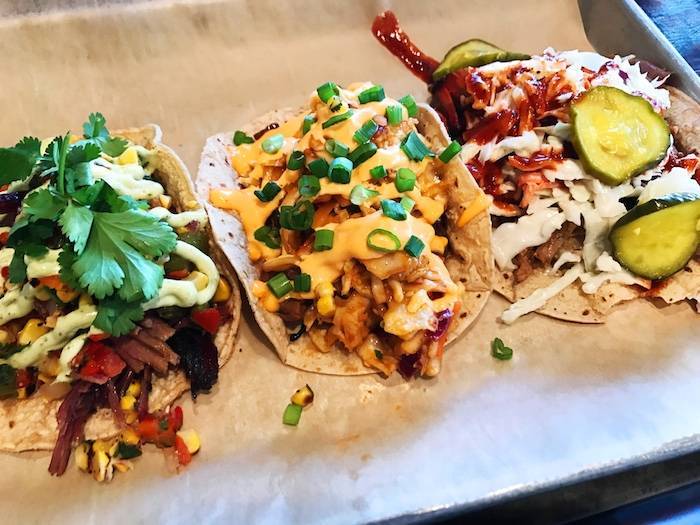 I stumbled upon Sweet Auburn barbecue by a total chance of fate. My mom and I were on our way back to Birmingham from Orlando after just having survived our flight back to Atlanta which included one of the most turbulent (and terrifying) landings I’ve ever experienced. We were a little jumpy and nervous and excited to be alive but unexcited to brave the forever confusingly winding streets of ATL. However, we navigated our way without too much difficulty to Highland Row Antiques which had been on my antiquing bucket list for months. After we had perused their selection of treasures and trinkets we asked the store clerk where we might find a bite to eat before we headed out. He directed us just a block over to a little white building on the corner.

When we sat down to order we quickly realized that this establishment was not your run of the mill barbecue and baked beans kind of place. After salivating over the entire menu I ordered the barbecue taco trio, jalepeno cornbread and a tall glass of Cheer Wine. Yes, they served CHEER WINE! If you don’t know what that is.. just know I’m crying a tear for you. I had never loved food more than I did at that moment. All the stress of almost perishing on an aircraft seemed like eons ago since I was now safely tucked away in the loving embrace of a delicious Korean bbq taco.

And to top it all off, their drink menu included a Butterbeer Cocktail! And since we had just returned from a weekend at Harry Potter World, we were pretty sure the magic had followed us home. (Maybe THAT’S how we survived the plane landing… Thanks, magic!)

If ever you find yourself in ATL, look up Sweet Auburn. I pinky promise it will not disappoint!

Show Your Closet
Some Love